The Vancouver Riots: Humanity at Its Worst 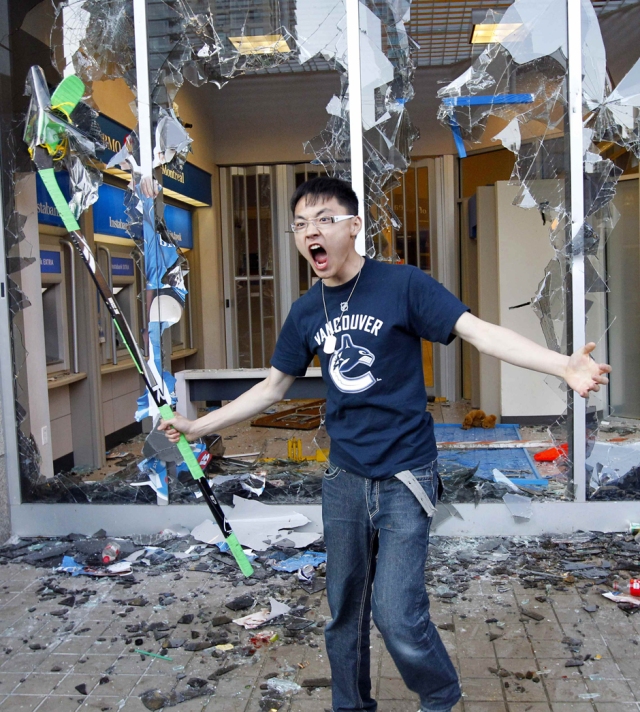 I don’t know about you, but when I think of rowdy hockey fans… skinny Asians are the first people that come to mind. Who the hell does this kid think he is? If he wasn’t wearing that t-shirt and holding that stick, I’d think he just rescued Princess Toadstool from King Koopa. Crazy. So, if you’ve been living under a rock for 24 hours, the Boston Bruins beat the Vancouver Canucks in Game 7 of the NHL Stanley Cup Finals. The game was in Vancouver. When their team lost, the city went absolutely apeshit. Riots. I mean RIOTS. Everything about these riots in Vancouver have just been blowing my mind. I had no clue how bad it was. Like, I’ve seen riots, but I will never understand them. I remember the aftermath of Rodney King. (April 26th, 1992, there was a riot on the streets, tell me where were you? You were sittin’ home watchin’ your TV, while I was paticipatin’ in some anarchy.) Mob mentality… I know it’s studied in classrooms, but it’s got to be studied more because I refuse to believe that anybody can wrap their head around this. Normal people just hanging out, some event happens, people are either very happy or very angry… then a few people start doing something stupid… and everybody thinks it must be a good idea. Just completely throwing the person that they know themselves to be out the window… and joining in. Let’s burn cars, thieve stores, fight people, and cause as much mayhem as possible. All laws are thrown out the window. Vancouver? A calm little city up in America’s Hat, right? Wrong. It’s freakin’ Canadian psychoville… like an awful movie where zombies, lumberjacks, hippies, terrorists and the children of the corn all had little babies and they decided to wreck shop after Game 7. Here are some pictures of what went down. There are so many good ones, these are only a few. 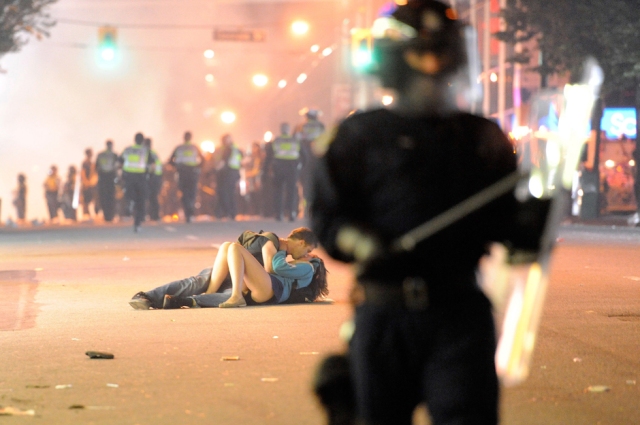 This guy might be my favorite. Hard core hockey fan, playoff beard and all. Hand wrapped up in a t-shirt for blasting his fist through windows, and by the looks of it, people. Just blood splattered all over the mannequin leg he’s carrying around. Check the reflection in the window too…that leg has a half ass coming out of it. This dude is just walking around clubbing people and windows with an ass cheek. I think he’s carrying a mannequin arm too. Always nice to have a backup plan. 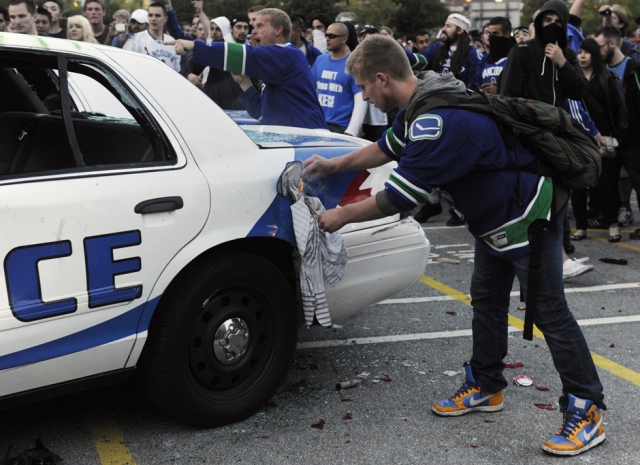 No, it is not good enough to just burn and flip normal cars… let’s go for the police cars… that seems smart. Who are these people? Like, if you’re just a regular person caught up in the mess of a riot, when does it hit you, “I know, I can stuff this shirt in the gas tank of this cop car, light it on fire… stand back and watch it blow up. Let’s do this.” Unreal.

The Vancouver junior college javelin team showed up to riot too, that’s cool. “These shoes are ugly! Put her back in the window!” 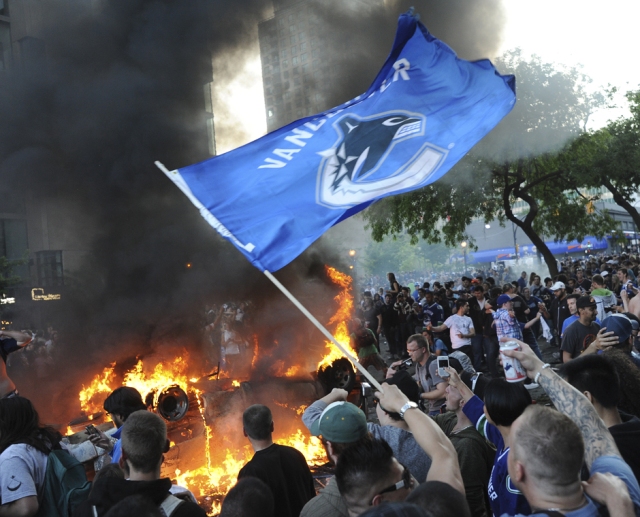 Somebody tell the dude holding up a can of Bud heavy that drinking on the streets is illegal.

All kidding aside, these riots are a sad state for the human race. Not many things shock me these days, but this was pretty shocking. Prayers go out to anybody that was innocent and hurt in any way. Can’t wait to hear about how all these photos and videos lead to thousands of arrests in Vancouver. Idiots.

[thanks to LT for lobbin’ up this site. go there for more crazy pics]

2 Responses to The Vancouver Riots: Humanity at Its Worst